Latest article:
Patients with severe sleep apnoea are at greate…

There are various theories about what can cause non-Hodgkin lymphoma, but in most cases, the doctors do not know what it is caused by.

According to Cancer Research UK, patients with hepatitis C are at a two to three times higher risk of developing the disease, whereas patients with hepatitis B do not seem to be at increased risk. Other infectious diseases such as mononucleosis (popularly called glandular fever) and infection of the stomach lining are associated with both non-Hodgkin lymphoma and other types of cancer.

For individuals with a compromised immune system, these diseases can trigger a process that can result in cancer, but it is extremely rare that it happens. In addition, researchers also point out that overweight can cause cancer, but only minimal evidence of this has been found.

When people develop cancer, it can also happen by chance and with the cause being completely unknown. All human organs contain stem cells that help renew the cells of the body when the old ones become worn. The stem cells can mutate by chance and in most cases, this is not an issue, but as we age, the mutated cells accumulate in the body.

The more these mutated cells accumulate, the greater the risk is that one of them will function so adversely that it develops into a cancer cell, which then begins to divide uncontrollably at varying rates, depending on how aggressive the developed type of cancer is.

There are four different stages of non-Hodgkin lymphoma: 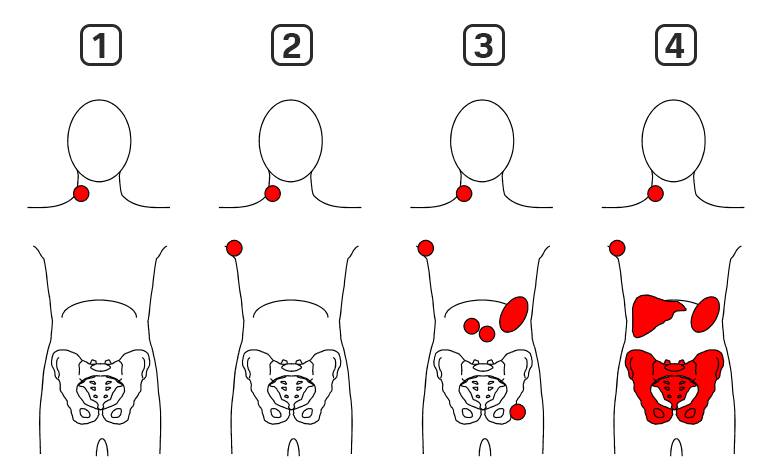 Moreover, it varies how active the disease is. Non-Hodgkin lymphoma is therefore also divided into categories according to how aggressive the cancer is.

In some of the instances where non-Hodgkin lymphoma occurs without symptoms, doctors refrain from treating the disease. Instead, the doctors closely follow the progression of the cancer on a continuous basis. This is done in order to avoid the side effects that occur with any type of treatment e.g. with chemotherapy or radiation therapy.

Chemotherapy is the most common form of treatment used with patients who suffer from non-Hodgkin lymphoma. If the disease is indolent, i.e. growing slowly, the patient is able to make do with so-called “mild chemotherapy”. This means that the treatment occurs on an outpatient basis, i.e. without hospitalisation.

The treatment occurs via tablets that help keep the disease contained. The side effects of mild chemotherapy are limited, but in some cases, patients experience increased fatigue and nausea.

Stronger chemotherapy usually consists of six to eight treatments with a two-week interval between each treatment. This can also be done on an outpatient basis, so that the patients can maintain a normal everyday life. However, the stronger the dose is, the more difficult it can be for the patient to maintain a normal everyday life. The dose is adjusted according to how aggressive the type of cancer is.

Why? Because we can help find research projects for your disease. In the meantime, you'll get important information and health news matched to your health profile.

Wait!
It only takes 2 minutes.
Do you want to be able to join research projects?
Free and non-binding · more than 30.000 members
Yes, sign me up!
Maybe later

Become a part of Health Panel

The goal of Health Panel is to improve health through research, but we need your help to do so. You can help by signing up for Health Panel and thereby possibly become a participant in research projects. We will only contact you if your health profile is consistent with a current research project. All research projects are pre-approved by the respective  Independent Ethics Committees (IEC) or Institutional Review Boards (IRB).